Welcome to our new blog series: Bento Customer Spotlight! Each installment features a current customer who shares their story of how they built their business, and how Bento plays a part in their success. 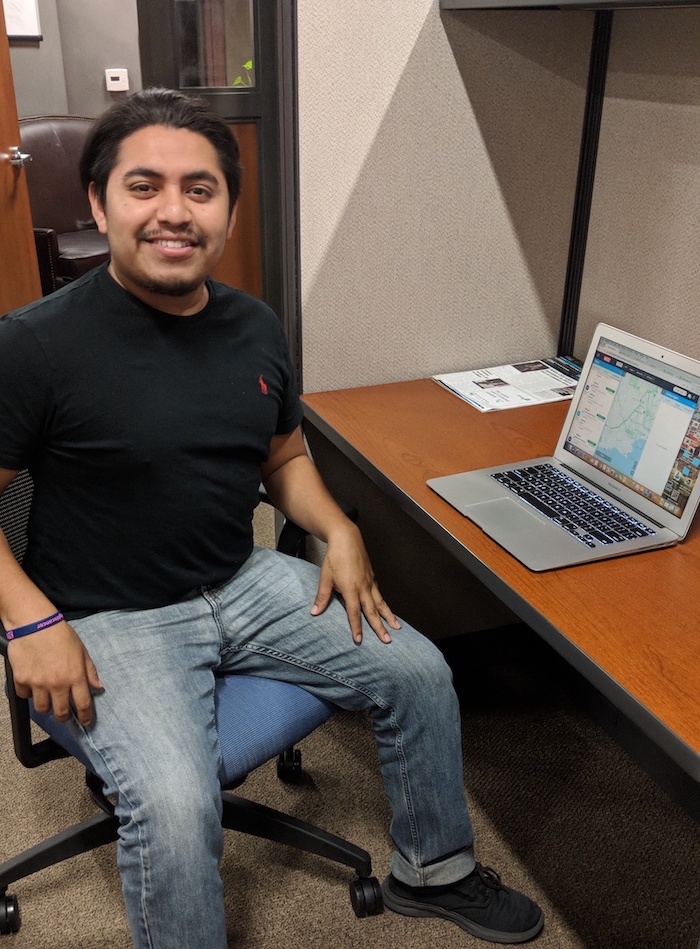 Whether he realized it or not at the time, Daniel Hernandez spent most of his life preparing to launch his current business, Santa Cruz Deliveries, which he co-owns with his brother Gerardo and his friend Annie. We sat down to chat with Daniel recently, and walked away from our conversation totally energized. Daniel’s enthusiasm for his work and his life are contagious.

Here, we’ll try to capture some of that enthusiasm so that you, too, can spend the rest of your day feeling invigorated about the business you’re growing.

The Building Blocks of Daniel’s Business

When we asked Daniel for his advice to other people thinking of starting a business, he said,

Just go for it. A lot of people keep postponing it – they say it’s not right yet, it’s not the right time. That’s just not the case.

He also advised to start with what you know: your community and the problems you see there. Daniel saw that his hometown, Santa Cruz, California, didn’t have many food delivery options (like Doordash, Postmates, etc.) beyond local pizza delivery. His business idea made a lot of sense, and ended up working out very well for him.

But behind Daniel’s ability to see the problem of insufficient food delivery options (in a college town, no less!) was his unique background.

First of all, he’d worked in the restaurant industry for seven years, starting as a dishwasher and eventually running a kitchen. He took culinary classes in college and worked as a sushi chef for a while. Then, he decided to return to school, this time to study business.

While he was a student, he drove for Uber and Lyft to keep up a flow of income with a flexible schedule. As he drove the residents of Santa Cruz, he had conversations with them about the lack of food delivery options. He took informal surveys of his riders, asking how much they’d be willing to pay for food delivery.

And then came the ah-ha moment: he could be the one to launch a food delivery business.

Some aspiring business owners would spend months building the right platform and getting enough restaurants on board. Not Daniel.

“We used existing software to get started,” he said. “We had six restaurants when we launched, just six menus.”

In Daniel’s view, the goal was not to launch a perfect platform, but to figure out as fast as possible whether his idea for a Santa Cruz-based food delivery business could work. 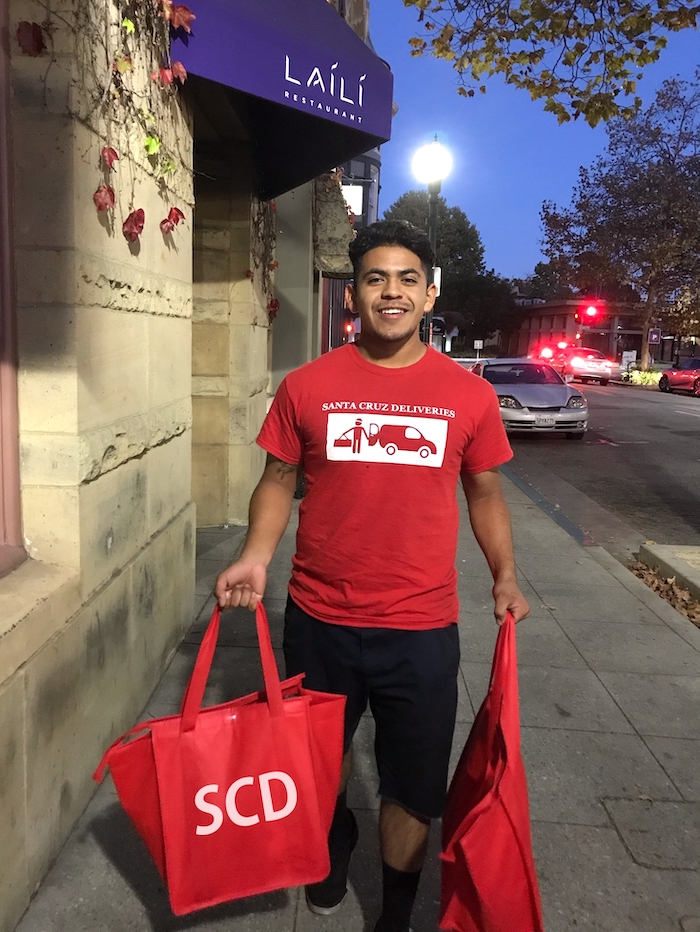 Gerardo, Daniel’s brother, is one of the three co-owners of Santa Cruz Deliveries.

And how did he find the software he used?

“I googled,” he said. “That’s what I do. I get curious about something, I research online, I figure it out.”

One problem he knew he needed to solve was handling payments: for restaurants that had partnered with them, customers could pay directly through the app. For everyone else, he needed a way for his drivers to pay for food when they picked it up. When Santa Cruz Deliveries started, drivers used a normal bank card.

“But the bank kept shutting us down for too many transactions,” he said. That proved to be a major headache: it would take a few hours to get the bank to unfreeze the card, and in that time, they weren’t able to make deliveries for restaurants they didn’t have partnerships with.

So Daniel started researching his options. He tried distributing prepaid cards to his drivers, which solved the problem of freezes, but presented a whole new batch of headaches.

“We had to go into the store every few days to load funds,” he said. Even worse, there was no way to easily track how much money was left on everyone’s card. When one driver claimed his card was stolen but actually spent the money on it for his own purposes, Daniel knew he had to find something better.

That’s when he returned to Google – and came across Bento for Business.

Bento cards solved the problems Daniel and his co-founders had encountered with other payment solutions:

Today, his drivers use Bento cards to pay for orders at any restaurant that doesn’t have a direct partnership with Santa Cruz Deliveries. Daniel and his co-founders keep the dashboard up on a monitor so they’re always on top of what’s happening.

The business is maturing in other ways, too. Once Daniel and his co-founders had proven that their model worked, they hired developers to build a proprietary platform.

“We have more control now,” he said, which is crucial for their growth plans.

We already mentioned that Daniel’s energy was inspiring. Another thing that resonated with us was his determination to create a business that made life better for both his customers and his drivers. 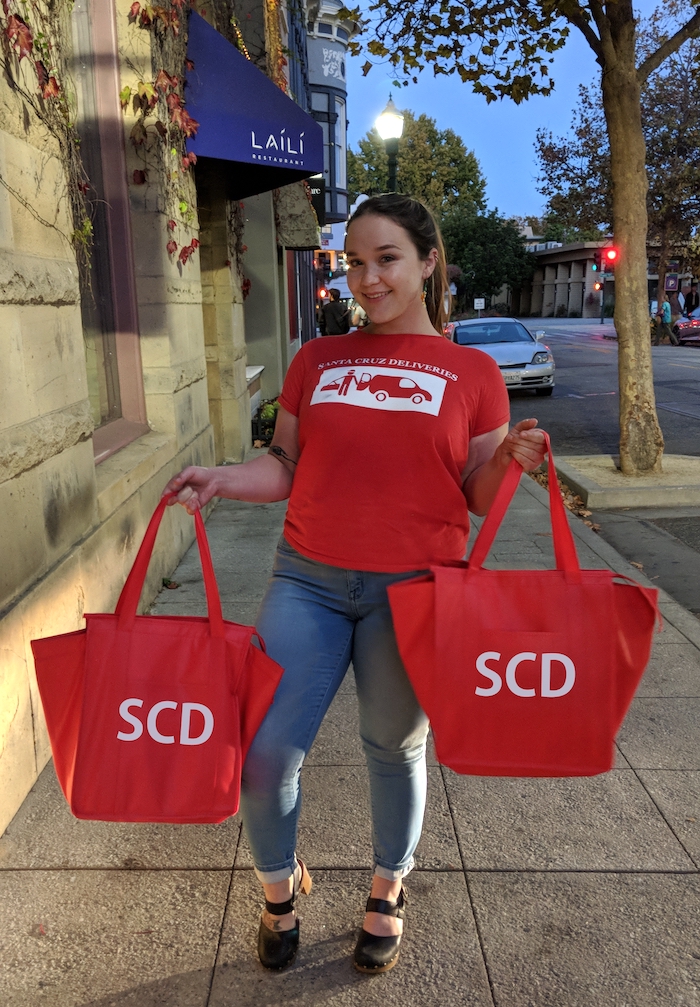 Annie co-owns and co-runs the business with Daniel and Gerardo.

Today, Santa Cruz Deliveries has 30 drivers, all of whom work on a contract basis, similar to the model used by Uber and Lyft. Having driven for those ride-hailing platforms, Daniel knew what it was like to work a disappointing shift and go home with less money than he’d hoped. So he knew that, if he wanted a workforce he could depend on, he had to make the job worth their time.

How? He and his co-founders examined the data from all their deliveries and wrote an algorithm to predict how much the company would bring in. They then set up a guaranteed minimum payout for various five- or six-hour shifts a driver could sign up for. For now, all this is still manual, but Daniel is hoping to eventually incorporate it into their platform so that it’s automated and constantly updated.

And of course, there’s the benefit his platform brings to the hungry residents of Santa Cruz.

“If I’m going to build something, it’s going to be better than what there already is,” he said. And while he admires a lot about the larger delivery platforms, “They’re not good at communication with customers,” he said.

Santa Cruz Deliveries, on the other hand, has a chat feature so that customers (and restaurant owners and drivers) can ask questions and get almost-immediate responses – often from him or one of his co-founders.

“That’s one of the things I like about Bento, too,” he added.

With a bank, I have to wait at least 45 minutes – sometimes an hour – for an answer. With Bento, I come away and I even know the support rep’s name – Liz – who answers my calls. I really like that, being able to talk to somebody.

Want to Start a Business? Do It.

As our conversation was wrapping up, we asked Daniel if he had any final thoughts to share with our readers. We loved his answer:

“There’s no greater feeling than having your own business,” he said (and then rattled off a handful of ideas for people interested in starting their own). “There are so many opportunities. Just get out there and see how you like it. You’ll know right away whether this is something you’ll want to do or not.” 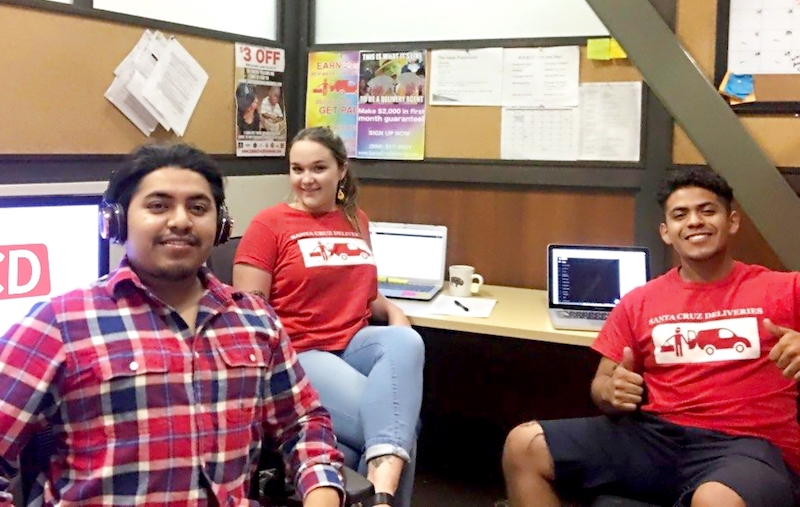 He emphasized that it takes commitment and time: putting in 24-hour days, missing parties, skipping time with friends. “It’s almost like having a kid,” he said. “You have to raise it from when it’s very little until it’s mature and you don’t have to be by its side anymore.”

And as with a kid—Daniel has a five year old of his own—it takes time. “The first year is the most difficult. After that, it gets a little easier – but it’s still a lot of work.”

Banking services provided by The Bancorp Bank, Member FDIC. The Bento Card is issued by The Bancorp Bank pursuant to a license from Visa U.S.A. Inc. and may be used everywhere Visa® debit cards are accepted. Virtual cards may only be used online and over the phone.
Copyright ©2022 Bento Technologies inc. / All Rights Reserved / 221 Main Street Suite 1325 – San Francisco – CA 94105 – 866-220-8455